DOLPHINARIUMS IN EUROPE: A few things you would like to know


It is easy to see why  people love dolphins and why they have such a strong desire to see them up-close. Today there are 34 captive facilities and 286 cetaceans in captivity in Europe. Countries keeping dolphins in captivity include: Belgium, Denmark, Finland, France, Germany, Greece, Italy, Malta, Netherlands, Portugal, Spain, Sweden and Switzerland. The 12 countries without dolphinaria are: Austria, Cyprus, Czech Republic, Estonia, Hungary, Latvia, Luxembourg, Poland, Republic of Ireland, Slovakia, Slovenia and the United Kingdom.

May seem like fun but the truth is much sadder. WDCS’s report, "Dolphinaria - A review of the keeping of whales and dolphins in captivity in the European Union and EC Directive 1999/22 relating to the keeping of wild animals in zoos", written in association with the Born Free Foundation for the European coalition ENDCAP, reveals that dolphinaria and the Member States that license them, are failing to meet the requirements of EU legislation which aims to protect whales and dolphins in captivity. The European Council Directive 1999/22/EC on the keeping of wild animals in zoos requires that animals must be kept in conditions that meet their biological and conservation requirements. Yet in the case of cetaceans, it is impossible for these requirements to be met in captivity.

About 70% of captive dolphins currently living in Europe are born captive, generally from a founding male, i.e., caught in the ocean. Totally unconscious of their natural way of life, submitted to the good will of their trainers, physically diminished, these captive-born have become distorted creatures: Their mortality rate is extremely high, especially during adolescence, i.e., between 10 or 12 years. They are not domesticated, they are deprived.  This is not domestication, it is deprivation. Deprivation of all their physical features. Remember that domesticating a non-human animal is obtained after thousands of years: dogs, horses, bovidae, sheep have been domesticated long before Neolethic.

In the manner the elephants and the chimps, dolphins remain wild even born in captivity. Wild dolphins born inside buildings who've never seen a live fish, distorted creatures who don't know what the tide is or what currents are. Some of them don't even know what the sky is. These are freaks. We created them for our own amusement, and we're selling it like it's education.

Ric O’Barry of the Dolphin project describes captivity as a life of silence and isolation: "Most captive dolphins are confined in minuscule tanks containing chemically treated artificial seawater. Dolphins in a tank are severely restricted in using their highly developed sonar, which is one of the most damaging aspects of captivity. It is much like forcing a person to live in a hall of mirrors for the rest of their life - their image always bouncing back with no clear direction in sight". As WDCS anti-captivity lead, Cathy Williamson states, these commercially driven, circus-style shows may seem like fun but the truth is much sadder.

If you understand the life of captive dolphins, you also begin to see the dolphin show with all its clowning around in another way. It's not clever anymore. It's abusive. When we understand that the dolphins are doing this because it's their only way of staying alive, we see it clearly for what it is: Dominance. We're making dolphins do silly things, they would never do in nature, because we're amused by dominating helpless members of another species.

The worst part is that it teaches children that it's okay to mock and disrespect one of nature's most fabulous of beings. The law permits this only because it's supposed to be educational. What a joke! But the joke is on us. These pathetic dolphins in captivity, wearing funny hats and leaping through hoops, are in no way like dolphins are in the wild. Need to bring all evidence to light and remove the veil of misinformation. Need also not to forget that like any other business, the dolphin captivity industry is based on supply and demand. As long as there are people willing to buy tickets to watch dolphins perform tricks, dolphins will be captured from the wild and trained to perform for huge paying audiences. Therefore, the key to putting a stop to the exploitation of dolphins is to reach the consumers. If the public knew what really goes on behind the glittering scene of the captive dolphin spectacle, most would revolt against it. In other words, rather than buying tickets to watch dolphins perform, they would be helping us FREE THEM.

Getting people to see what we see at a dolphin show, that's our big goal. If people understand our message, they'll join us. If they can realize that when we talk about "dolphin abuse", we don't necessarily mean that the dolphins are being kicked or neglected. Being in captivity itself is abusive.
On Friday, June 28th, hundreds of European activists are going to Brucells, home of the European Union, urging the EU and its member countries to make Europe dolphinarium free. The demonstration will take place in front of the Health, Food Chain Safety and Environment offices, in charge of Belgium zoos and dolphinarium.

There are three things we should do. First, stop capturing. Second, those animals that can be released should be. Not all of them can, but all of them can be transferred to a natural seapen somewhere, where they can experience the natural rhythms of the sea and live out their lives. Finally, we need birth control. That's why we urge the European Authorities to ban any breeding program of cetaceans into the EU. There’s no reason for any dolphin to be born in captivity. 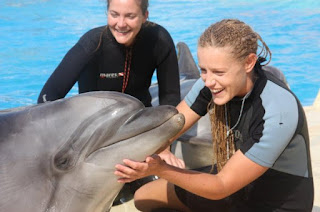 Ένθετο: Dolphins are no circus clowns!